(Declaration: This article is only used for popular science purposes. In order to protect the privacy of patients, the relevant information in the following content has been processed)

Summary: 70 -year -old male patients, 9 days ago in a medical examination in the outer hospital, found that the chest CT showed the density of soft tissue under the right upper pulmonary pleural, but there was no symptoms of discomfort such as chest pain and chest tightness.So he came to our hospital for consultation. After the patient was admitted to the hospital, the relevant examination was improved. According to the results of the examination, the clinical diagnosis was pulmonary nodules, mild obstructive pulmonary vitality dysfunction, and emphysema.So I performed lung disease resection (right)+pleural adhesion for thoracoscopy for patients with thoracoscopy, and postoperative pathological prompts were lung adenocarcinoma.In order to control the patient’s condition, oral targeting drugs, anti -tumor, anti -infection and other symptomatic support treatment were given, and regularly came to the hospital for review.Since the follow -up, the patient has a stable condition and has not seen tumors recur.

[Treatment effect] The patient’s surgery is smooth, and the condition can be controlled

At the end of December 2021, New Year’s Day is approaching, and a 70 -year -old male patient has been cured. The patient reported it: 9 days ago in a medical examination in a foreign hospital, the chest CT showed the density of the soft tissue of the lower lung pleural, the largest section 1.3cm*1.0cm, and the largest section.No symptoms of discomfort such as chest pain, chest tightness, cough and other discomfort.There is no special treatment. Today, in order to further treat our hospital for further treatment, the outpatient clinic of our hospital shows that the right lung CA surgery of the 2017-1 outer hospital has not performed chemotherapy.The thickening of the right pulmonary back pleasure is formed with nodules, and the metabolic is abnormally increased. Considering is mostly malignant tumor lesions, which has a high possibility of metastasis.Then give a general physical examination: the patient’s consciousness is clear, the response is average, the skin and mucous membranes are not seen in yellow, the superficial lymph nodes are not scoop and swollen, the thoracic has no deformity, the two lung breathing sounds are thick, and there is no wet and wet.abnormal.Immediately give the patients to improve the lung CT examination, and the result is prompted to change lung emphysema and post -right lung changes; there are a little bar and shadow on both sides, which is chronic inflammation; a little bronchial expansion on the back of the upper lobe on the right side;Nodules, thickening local pleura, excessive metastases combined with the history of the medical history; the lungs are scattered in the nodules.Combined with the patient history, symptoms and related examinations, the preliminary clinical diagnosis is pulmonary nodules, mild obstructive pulmonary vitality dysfunction, pulmonary emphysema, metastases, etc. I suggest that the patient is admitted to the hospital for further examination and treatment. The patient agrees.Since the patient’s onset, the spirit, physical strength, weight, and sleep are available, and the second is as usual. 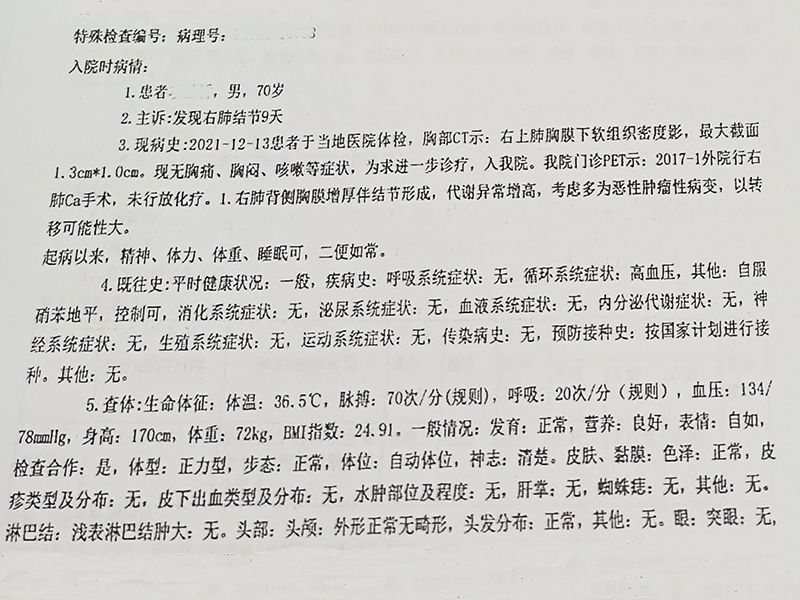 After the patient was admitted to the hospital, I communicated with him. I told him that he is now considering the lung nodules, mild obstructive pulmonary vitality dysfunction, emphysema, metastases, etc.Clarify the cause, the patient agrees.So I asked the patient to complete the pre -surgery examination. After excluding the taboos of the surgery, I performed a lung disease resection (right)+pleural adhesion for patients with thoracoscopy.It is 2.5cmx1.5cmx1.3cm.See a bunch of 2cmxlcmx0.6cm in the gray -brown non -plastic organization.Seeing under the mirror: Examination conclusion/diagnosis: (right) lung low -differentiated adenocarcinoma, cancer tissue violates the lungs and diaphragm to peripheral adipose tissue (staining fiber staining), no clear vessel cancer thrombus and neural violations are not seen on the sliced slices.Check out the airway.Also see a widely chemical calcification for pleural with comprehensive deciduous tissue slices.During the operation, I sent the lesion tissue to the pathology department for testing.Immunohistochemical dyeing tumor cells: CK7 (+), CK20 (-), Villin (stove+), CDX2 (-), P63 (part+), Calretinin1 (-), napsina (-), P40 (-), GATA3 (-), PAX-8 (-), PSA (-), INI-1 (+), BRG1 (SMARCA4) (+), NUT (-), WT1 (-), D2-40 (-), in-situ hybrid detection EBV: eber (-); Special dyeing: PAS (+), D-PAS (+).After the patient returned to the ward, I gave patients to inject cephalosporin sodium to prevent infection.After 28 days of hospitalization for patients, the pathological results were returned to lung adenocarcinoma. Considering that the patient recovered well after surgery, he was discharged.In order to control the development of the tumor 4 weeks after surgery, I asked the patient to take the oral targeting the oxinininibicinibicinibicinibicinibicinic acid and regularly review it.

The patient’s surgery was smooth, and there was no surgical related complications.After surgery, the patient’s mental condition improved, and occasionally had surgical wound pain and intermittent cough. Patients were generally acceptable.Examination: Both lung breathing sounds can be sounded, not heard and obviously wet and wet, heart sound is clear, law Qi, chest tube has been removed.After 28 days of hospitalization, the patient’s incision healed well and had no other discomfort, so he was discharged smoothly.Patients began oral oral oxininibicinibiciny in the fourth week after the operation, and came to the hospital for review on a regular basis. Since the follow -up, the patient’s condition is well controlled and the tumor has not seen recurrence.

The patient’s surgery was smooth, and the postoperative recovery was well recovered. I was very pleased.I was discharged from the patient before discharge of the patient. I told him to continue to pay attention to the regular review of the lung CT after the operation. In the early days, it was reviewed every 3 months, and the later period was reviewed every six months to monitor the development of the condition.Actinib tablets need to be taken after surgery. This drug is a targeted drug, which may have certain damage to the liver and kidney function and blood system. Therefore, it is necessary to regularly come to the hospital to review the blood routine and liver and kidney function.After returning home, pay attention to the diet, mainly with a light diet to avoid eating spicy food; avoid cold infection, pay attention to wound care.Strictly quit smoking and alcohol to avoid lung function damage.After discharge, lung function training should be conducted to improve lung capacity.Comprehensive anti -tumor treatment outside the hospital.If you have discomfort such as cough, chest tightness, and chest pain, you must come to the hospital as soon as possible.

Pulmonary adenocarcinoma is a type of tissue pathological type of lung cancer. A type of malignant tumor characterized by the transfusion of prostate cells, which starts to occur in malignant tumors of bronchial mucosa or bronchial glands.Genetic gene mutations are related.Because it is mostly peripheral or edge growth, it is easy to invade blood vessels, so blood row metastasis and lymphatic transmission transfer earlier.Symptoms of patients with pulmonary adenocarcinoma appear late, and early diagnosis is more difficult. Part of them is due to symptoms.Once discovery of pulmonary adenocarcinoma, treatment should be performed in time to prevent tumor from continuously growing, metastasis, and threatening human life.In this case, the patient found that the lungs had nodules and mild obstructive pulmonary vitality dysfunction, so I performed a laparoscopic lung disease (right side)+pleural adhesion for patients with thoracoscopy.For lung gland cancer.In order to prevent metastasis or recurrence of lung adenocarcinoma, I asked this patient to take targeted drugs for treatment.After comprehensive treatment, the patient’s condition was controlled, and the condition has not recurred so far.Therefore, it is recommended that patients must be checked regularly to actively cooperate with the doctor’s treatment in the disease, listen to the doctor’s guidance, and do not listen to some doctors on the rivers and lakes and have irregular therapies.

More and more children have leukemia. Parents pay attention to: children have 4 abnormalities, they need to investigate as soon as possible